Juried shows are interesting – the juror (or jurors) is the person (or people) who decide what gets in and what doesn’t. What makes it interesting is that art is one of the most subjective things, so what are the litmus tests for deciding if a work is good enough? Shows with extremely broad categorizations are interesting too – by not specifying too much, there can be an awful lot of submissions. The show at the Center for Fine Art Photography, Black and White, which is up til August 6th, fits both of these categories. An annual show, the only requirement is that the image must be black and white.
But before I talk about that, I really want to talk about Borderline, a series by Kerry Mansfield that is in the North Gallery at the Center. The photographs, which can be seen online, are printed from single negatives onto color paper, using the old-school darkroom approach. They don’t use double negatives or Photoshop. The photographs, which compress interior spaces and the great outdoors, are somehow more tangible because of this. The best part is how you can’t tell if you’re looking out or looking in, which I find very visually engaging. 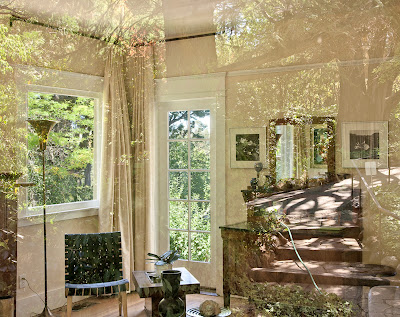 My personal favorite is Untitled #59, which looks like the coziest place to sit down and read a book. The ways that the textures interact are fascinating: the ceiling has dense foliage on it, and there’s a stone walkway extending out of a vanity. The scale of the work has something to do with it as well – its being a 30 by 40 inch color print certainly helps creating an interesting experience with the viewer.

But back to the main show. Black and White ended up with 50 images out of 3,000 submissions – and there’s definitely quite a few that stand out. Right next to the entrance, to the left of the juror’s selection (a portrait of a man holding a baby with an oxygen tube coming out of its nose) is a small tintype diptych, totaling 5 inches by 10 inches. I had never seen a physical tintype before, just reproductions from the Internet. Titled Dragon, it’s a wet plate collodion tintype photogram of skeletal remains that the artist, S. Gayle Stevens, doesn’t tell us the origins of. It is part of a series of natural objects that have been visually cataloged in the same manner. It does something very well that all photographs ought to strive to do: it elevates the object from being a collection of bones to something that is visually interesting and worthy of consideration. I’ve always been in love with the idea of tintypes, so I might be a bit biased, but I also think that working in the medium of tintypes only improves this – it brings to mind old, 19th century natural science museums, full of curiosities. 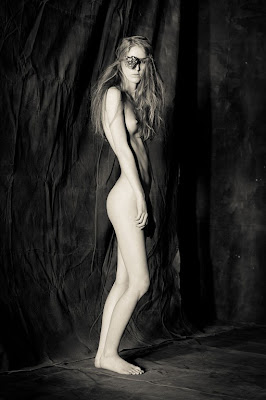 In this same vein, Mask Nest, by Thom Jackson, which is a 20 by 24 inch image of a nude model that is wearing a wasp’s nest for an eye patch. Both Dragon and Mask Nest have a sort of esoteric feel to them, as if they’re alluding to something that you have to be in a secret society to understand. The portrait is direct and unflinching – you will lose a staring competition with this photograph. She seems imbued with power, and is honestly quite intimidating. The way the photographer lit the scene correlates with this – there is just enough soft light to properly describe everything in the scene, but there are subtle shadows that evoke strength. The only thing I don’t quite “get” is the wasp’s nest eye patch – it indicates esotericism, but is mostly unexplained. The artist’s statement mentioned that the eye patch allows the model to be both protected and nude, which I would disagree with – she could definitely beat me up, with or without an eye patch.
As with all the shows at the Center for Fine Art Photography, all the photographs can be seen online, but I urge you to go to the gallery and see them personally – the Center is always free, and it’s always better to see art in person.
at 2:18 PM No comments:

Fort Collins is a fantastic and mysterious place. Of all the places I know of, this town’s got the best beer, great people, and beautiful bike trails. The music scene is thriving, the art scene is exploding, and I would love nothing more than to contribute to the culture here. I’ve always wanted to contribute to something great, which is why I’ve decided to start this art blog. I’m mostly just an art student at CSU, who doesn’t know how to not be nerdy about art, so I figure this is the best use of the knowledge I’m very, very slowly amassing. Since I’m no blogger – or that much of a writer, for full disclosure – this thing might be awkward or cumbersome at times.
But I’d like to let you know what I’m planning. This place usually takes second fiddle to Denver in regards to Front Range art centers, but the art here is some great stuff. I want to make it more accessible and visible. Not only is there all the art that gets produced at Colorado State, but the local stuff is awesome too – just take a look at places like the Art Lab, FCMoA, and the new GNU Gallery. I want to make a centralized place that people can check for the gallery shows and artists that are around here.
In addition to simple reportage about what shows are happening when and where, I want to provide and encourage discourse about the art itself – critiques, gallery reviews, and interviews with artists. Ideally, I won’t be the only writer either, since I believe in the importance of giving other opinions voice – this is art, after all, and of all the things that one can be biased about, this is the most susceptible thing.
As I’m sure most people know, it’s hard to go about town on a student’s budget, but I’ll hopefully have something substantial up here soon. I’ve got my eye on the MFA exhibition at the Art Museum at the UCA, which is up until June 10th. I’ve been there once already – and what a better place to start than the best that Colorado State has to offer at the MFA level? After that, there’s plenty of awesome artists around town that I would love to interview. Until then, Dear Reader, I hope you have a great day.
at 8:54 PM No comments: